The Value of Things & The Story of The Ball

The streets that I grew up in were fashioned from blackened Yorkshire stone and each of these solid streets nourished hundreds of dwellings and lives just like mine. Life spilled out of every brick and crack and yard. There were dogs and cats, and rats, and rag and bone men on trailers with horses, and men delivering milk and fish on floats and factories all around that smoked. Women wore hair in curlers and smoked like troopers, and men in flares and fly away collars swaggered about and got in to fights on the corners.
Waste land was taken over by hordes of kids and made in to race tracks and everything seemed to co-exist in a perfect harmony. Like an image from a Lowry painting.

The Value of Things : And a Story about the Unlikeliest and Unexpected of Friendships

I first met Sam and Mary when I was born.

They lived next door to us, and for the first few years of my crazy, funny little life, they were a wonderful part of it. 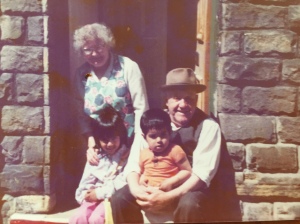 We lived in a row of back to back terraces – and we were at the back, facing away from the noise and bustle of the street, and if you walked down the short gloomy cobbled alleyway to find us, you’d come out in to the light and a place where it was always Summer.Here the breeze was always warm, and there was a quiet hush, with only the sound of bees, and birdsong, and distant music from somewhere beyond.

Sam and Mary had met at a tea dance. It was during the war she said, and they’d “fallen madly in love”. I didn’t know what that meant, “madly in love”, but it sounded just grand the way she explained it.

She’d gone to the dance with her friend, her popular friend, and they’d both noticed Sam. He was the most handsome man in the room and when he walked over to them, she’d never in a month of Sunday have expected that he would ask her to dance, as no one ever did. But that night it was her turn.

She hated her glasses, because they magnified her eyes in to huge saucers. She’d put them away and hide them, but she was as blind as a bat without them, and she’d soon have to put them back on again. Sam had not noticed her glasses, instead he’d whirled her around the dance floor, till she was dizzy, and for once she’d felt like she was the prettiest girl in the room.

After the war, they’d gone and got themselves married, and had some children that never visited because they were all grown up. So I guess adopting us came easy.

She was a real life character from the old films I was so fond of, 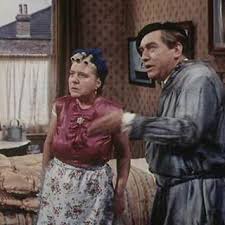 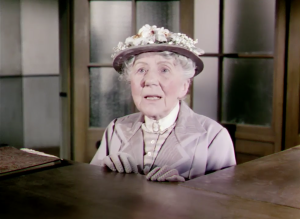 and I was mesmerized by her.

On wash day, I would sit on her kitchen table, with my legs swinging over the edge, and I would listen to her many wonderful stories, whilst she set about starching his shirts in huge steaming pans, pulling them out with giant tongs and feeding them through the mangle.

Her favourite fragrance was ‘lily of the valley’ eau de cologne, which came out of a cut crystal glass bottle that was kept safely tucked away in a beautiful purple box, and every night Sam would say how nice she smelt, and then he’d ask her if she would do the honour of dancing with him. I would watch in delight, and Sam became my hero. 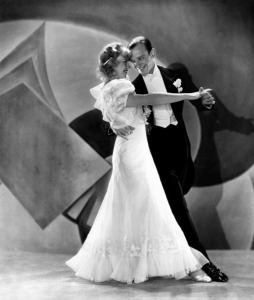 So of course, I had to adopt them in return, as my own grandparents lived far away in exotic climes.

Sam was as deaf as a post and wore a trilby to distract the observer from his hearing aids. There was always a waistcoat, and a smart shirt, and his shoes were always shiny because “you should always look your best as you never knew who you might bump in to’, and he was right, as you never did.

So, as blind as a bat, and as deaf as a post, and still as madly in love as the day they first met.

Sam was a gardener, and he grew roses. With little pathways that criss crossed through them. We’d work our way down the paths and he’d explain all the varieties he grew, and turn over the leaves, and show me the dew that collected and sparkled like diamonds, and how you should dead head a rose, and he’d pull the flower heads down so I could catch the scent.

We’d sit and watch the butterflies that came to his garden, all of the colours of the rainbow, the swallow tail or the admiral and peacock, and he could name them all and sometimes we’d collect lady birds and make homes for them in glass jars, and release them all at the end of the day.

To me his garden was a magical forest of towering prickly thorns with statuesque blooms that touched the sky as they waved so high above my head that I could barely see them. And through a child’s eyes and my multicolour imagination I dreamt of all manner of wild things that lived in that forest. There were peacocks and dragons that flew, noble knights on chargers roamed through it searching for deeds that called on their chivalry,  and deer lived in the dark corners with many other wild creatures that were un named and were guardians of it.

We’d be looking for hours and then Mary would shout us in, and there’d be delicious cake with coconut in it and glace cherries on top.

Sometimes I got stabbed by the thorns, and Sam would say “roses caught you off guard, so you had to be careful around them” , and I would nod vigorously as everything Sam said was always true. 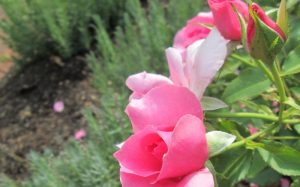 One morning, I went to visit, and Sam explained that something awful had happened in the night.
There’d been an attack. There were intruders in the garden, and if I wanted to help save it, then I had to come help.
We walked through the magical rose forest but for the first time I was afraid of it, and this unseen threat and held his hand.

He gingerly pulled up some of the leaves and showed me the underneath, a mass of green bulbous bodies, crawling over each other, with big googly eyes and antenna and wings. I was horrified. He said it was greenfly.

He took the leaf between his fingers, and pressed down hard. In my mind the bodies popped under the pressure, and their green blood stained his fingers, “if you don’t do that then the flowers wont come back ” he said, as he held out a different leaf which was meant for me this time.

I took a deep breath, and held the leaf. But found I couldn’t squeeze  no matter how hard I tried.

He laughed and patted my head, then walked on purposefully down the path. Slaying them all single handedly as he went. All of them.

Over the next few days there was no time to walk through the forest any more to look for the wild things,  because the forest had become a place of death and destruction.

His fingers were stained green permanently now, even after he’d scrubbed them clean, and he said that if I wanted to “grow up to be a gardener”, like him, then I had to get green fingers too.

One day, and not much later, we moved away, it was out of the blue.
I remember being excited about it as I’d heard there was hot water that came out of taps, and a toilet in a bath room and you didn’t have to go outside in the night ever.

So, my childish goodbye was not what it ought to have been, given how important they were and staying in touch was impossible, as no one had phones, and what with my new distractions they were soon forgotten.

Several years later, we paid them a visit. They’d moved in to a flat because it didn’t have stairs. The flat didn’t come with a garden.
Sam said he missed it, but “by heck” it was nice to see us.

The next time we visited, Sam had passed away, and Mary was not herself any more.

When the warm winds of Spring arrive, so do my memories of them, and then I am back there again, reliving those happy times.

I have my own garden now,

and teach the boys if they will listen to me, and like Mary, I’m fond of baking cakes, and like Sam have the stories to tell if anyone wants to listen to them.

I never got the green fingers he hoped I would, but the tree I killed by accident last year, came back to life over Easter, so perhaps I did good after all. 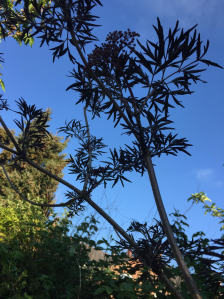 The most valuable thing in life, is the people. When we touch the lives of others and choose to leave a positive impression by doing a good deed, we live on and make a difference, bigger than you might ever realise. Just like Sam and Mary have to me, and  it pleases me that you know about them too now.

I wish they lived next door again, and that the boys could meet them, the sweetest, kindest of hearts. What a truly wonderful thing that would be for all of us.