The Value of Things: When we Were Treasure Hunters & The Story of the Giant Cat

I was born in Bradford in 1969, and remember as a youngster watching a lot of TV. It was always on – that big old TV. There was no viewing supervision which meant I pretty much watched everything I wanted to.
Ealing comedies to Benny Hill, the news, to Saturday afternoon wrestling with Giant Haystacks & Big Daddy, songs of Praise to Jesus of Nazareth, the Professionals, to Westerns and Alfred Hitchcock. I watched it all. I read everything too. Preferring stories of the fantastic and improbable. Good overcoming bad. Lead characters in magical lands, with mythical creatures.  Bollywood films 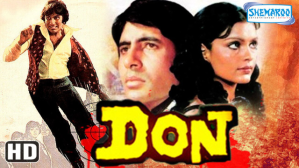 showed life as unpredictable, one minute bleak & tragic but that eventually everything always came good if you remained positive. So I became an optimist and began to believe that everything was possible too.

I decided I wanted to be an astronaut, it was that, or be a pirate. As it turned out, I became a project manager instead. I met Paul, relatively late in life by most peoples standards and noticed fairly early on that he owned hundreds of reference books. Sometimes he’d flick through them with me when he wanted to teach me something.

He’d amassed the contents of these in to his head. His job was ‘finding things’ . He found things that were beautiful, and of value. He found them for very little and sold them for more because he knew people would desire them. That was his job.
He was a real life treasure hunter. That’s what he was.
A seeker. A mid-century adventurer, an explorer.
I gave up the idea of becoming an astronaut, and thought being a treasure hunter with him was better.

So off we went, and got ourselves married. It was 2005 & we honeymooned in Italy. Italy was hot in the Summer, we hired a car, opened all the windows & travelled the whole length, North to South. East to West. 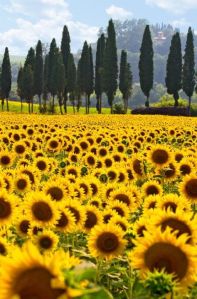 Through rolling valleys of sunflowers on Tuscan landscapes,and across perilous plunging cliff tops on the Sorrento coastline, over the dense truffle wooded mountains of Umbria.

We stayed where it appealed, sometimes in castle turrets, we’d eat in vineyards or olive groves, and at dusk we’d cool down in medieval squares whilst watching opera and drinking banana daiquiris 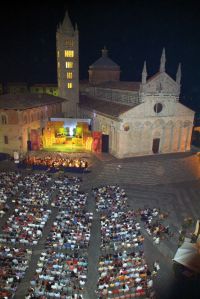 Everywhere we went, we’d stop and look for treasure. It was everywhere if you looked hard enough. We found grillo phones 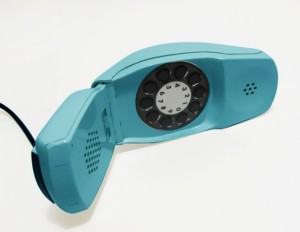 behind Vatican square and bought a suitcase full of them for a song.

Near Castagliano de Lago we came across a remote pottery one evening, and nearly didn’t go in, half expecting to find only mass produced pots for tourists
But we did go in, and that ‘dear reader’ turned out to be one of two of the most extraordinary finds of our mid-century modern life.

The pottery was piled high, full of vintage Bitossi. I really do mean piled high.
Vases, pots, stylised animals. All sizes and shapes textures and glaze. All in mint condition. All at a fraction of the cost you’d expect.
It’s what any discoverers dreams are made of and it had remained undiscovered.
We bought everything in there. Hundreds of pieces. All of it every last little bit.
I forget the name of the shopkeeper, now that years have passed, she thought we had sunstroke at first, and was mildly suspicious – but we paid her what she asked for, and went back the next day to work out how to get it all shipped home.
I remember unpacking it all a few weeks later, carefully, and feeling nervous and excited, heart in mouth – hoping it would all be as it needed to be.
It was.
A few weeks later she called to say she’d found a load more in her shed, and did we want it. Of course we said yes, we hadn’t seen it, but took a risk and hoped for the best.
When it arrived we found a giant cat had managed to find its way in to the delivery. He was solid and heavy too. 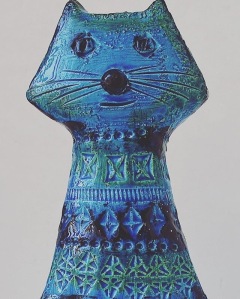 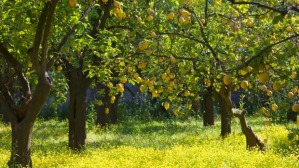 So you see, the unlikely and improbable can and does happen from time to time.
I might not ever make it to the moon as an astronaut, (although as an optimist I’d like to think it might still happen), but being a treasure hunter has been a pretty good second best.

The giant cat shares the mantelpiece with  the blue rooster – I’ll go back to Italy one day, and he’ll come with me of course, and we’ll try to find that lemon grove.